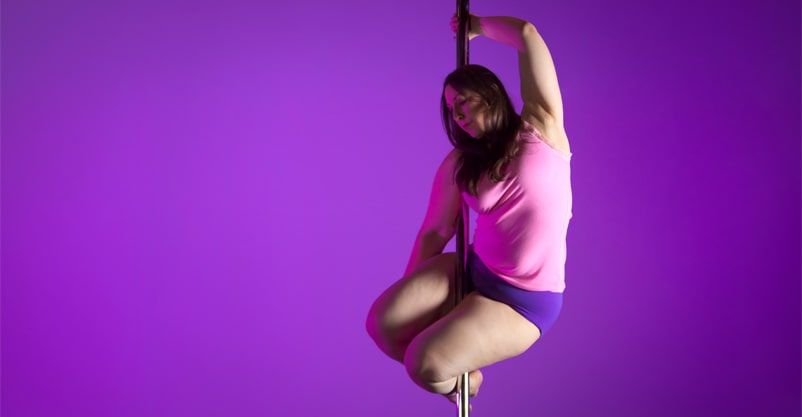 Written by This Girl

I have had so many fantastic body positive experiences with pole dancing that I want to shout them from the top of every roof, mountain, and blog! However, before I can adequately communicate my body positive experiences with pole dance, I first need to share why I would desire body positive experiences. The first time it occurred to me that I should lose weight, was at nine years old, in the 4th grade. We were sitting on the rug waiting for class to begin when someone called attention to my emerging belly fat. When I sat you could see that my lower abdomen was beginning to bulge. I dismissed the accusation that I was “getting fat”. The student pointed to other girls sitting around me and as I looked comparing myself to them, sure enough their tummies didn’t bulge quite as much as mine did. I went home and began an exercise regimen that I followed for weeks. But it never seemed “good enough”.

By middle school my body was still being compared to those of my peers. In physical education class a boy told me my legs were not as “favorable” or “shapely” to him, and by his estimation my legs were inferior to those of other girls. I stopped wearing shorts and High school would only continue with body negative experiences. The summer before my senior year I showed up to cross-country pre-training. My coach asked me how much I had trained over the summer. I admitted that I only trained some. His eyes looked my 5’ 8” (172 cm) body up and down and replied, “It doesn’t look like you have trained at all.” He then asked me how much I weighed. I told him that I was between 155 and 165 pounds (70-75 kg). He insisted he would train me to a weight between 110 and 120 pounds (50-55 kg), because that’s what he felt I should weigh.

My home environment didn’t feel any gentler and I went to extremes to evade my body under scrutiny. Regardless of the occasion, I often wore the clothes of older siblings or those of my parents. I declined my mother’s offers to buy me new clothes. I needed to avoid torturous moments inside a dressing room hearing my body parts discussed in connection to the clothes I was trying; because those experiences made me self-conscious and insecure about my body.
The only affirming and body positive moment I can recollect occurred one holiday when my grandmother admired my outfit and said, “It compliments your figure very well.” Suddenly every set of familial eyes were looking at me and I could not endure the pressure of that attention. I burst into tears and ran to the bathroom where I had a panic attack that necessitated I breath in and out of a small paper bag.

In college, I continued to be an athlete in swimming and water polo. Despite having to wear a revealing swimsuit, I always walked around the pool deck with a towel around my waist to hide my legs. I was still ashamed of them. In the locker room I sought as much privacy as possible behind the doors of bathroom stalls and changing rooms because no one could make fun of what they could not see.

The intensity of college workouts led me to ask for a dietitian referral from my general practitioner. My concern of being overweight despite so much physical exertion was not taken seriously. When I graduated college and my intense training ceased, I gained more weight rapidly. The onset of such rapid weight gain caused stretch marks on my arms and legs as well as intense psychological scaring. I felt more ashamed of my body than ever before. A seasonal flu took me to my doctor, the same one who dismissed my concerns two years prior. She shamed me for my excessive weight. When she said I would die of heart disease or diabetes she further crushed my psychological well-being. At this point in my life I may have been a voluptuous body size, but I was starving for body positive influences.

In my early thirties, on a whim, I walked into a pole dance studio looking for a fun thing to try. One of my first tasks was to stand within inches of the large wall mirror and stare at my reflection while I danced.

“Aint nobody gonna wanna watch you dance, if you aren’t willing to watch yourself,” my teacher shouted. “I can teach you to dance”, she continued, “but you’re gonna need more than that to stand on a stage to command attention… you’re gonna need self-confidence!”

I was hooked on pole dancing immediately and the following years would continue to undo the twisted knots of bodily indignity that had entangled me. It was in a pole dance studio that I began to see how every body is unique and dances uniquely. I learned what my exceptional gifts were when one of my teachers, a beautiful and strong role model told me, “I admire your energy and creativity.” I felt validated and appreciated for what my body could offer and not condemned because it didn’t adhere to rigid societal standards. Once I was able to see, embrace, and be at peace with the uniqueness of my strengths and weaknesses I was unshackled from the trap of comparing myself to others that had begun on that elementary school rug. 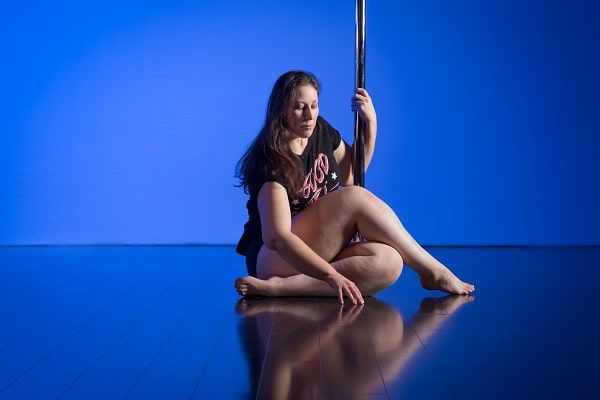 My excess weight made pole dancing difficult at first. It took me longer to master certain moves, but teachers were patient, so I stuck with classes and began experiencing results. Around the time I began poling, I started eating gluten-free and dairy-free and I began to shed pounds. The desire to achieve certain moves motivated me greatly. My progress was being noticed, but so were old habits. A teacher had stopped me on my way out from class to congratulate me on that progress and somehow the topic of my legs came up. I admitted that I wore pants to cover my legs, she looked down at my legs and without hesitation remarked, “There’s nothing wrong with your legs. What do you think is wrong with your legs?” And with one utterance, a spell cast by a boy from school was broken.

My pants became shorts, but classmates encouraged me to make them even shorter. After class a classmate approached me and said, “Bring booty shorts next week and show off your amazing booty.” It finally struck me that I was now in an environment that not only welcomed but perhaps elevated my larger physical attributes unlike my experience in cross-country running. As I grew more and more comfortable with my body my outfits became more impressive. One night a teacher stopped in the middle of class when she realized it was ME wearing what I was wearing. She stopped the music and the routine we were doing to explain to the whole class how I had grown as a dancer and how my clothes reflected that. Her remarks and gestures removed the pain sustained inside a dressing room as a teenager.

The final test of my progress would take the form in my ability to perform in public. Could I handle the pressure of all eyes on me? Or would I break down emotionally like I did that holiday due to my Grandmother’s comments. The circle of positivity from my coaches and teammates during my first pole competition led to a successful performance that earned me a silver medal. 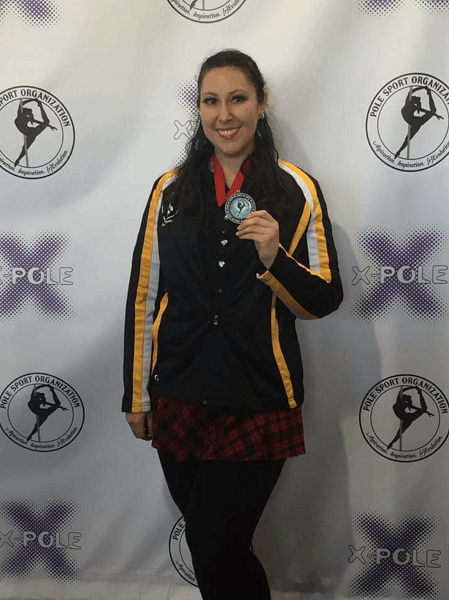 When I walked into a pole dance studio for the first time, I never imagined it could provide the healing space I needed. I never imagined that five years later I would be training for my 4th and 5th competitions and racking up certifications to teach. My weight is still under continual management as I am currently implementing the keto diet into my lifestyle and training. But the shame and stigmas surrounding my body and its flaws have significantly lessened. I am able to walk around in tank tops and shorts without feeling a crippling sense of self-consciousness or the need to cover up. However, the change goes much deeper. Many of those whom saw my change can affirm that I am not the same person. I have undergone a transformation inside and out. 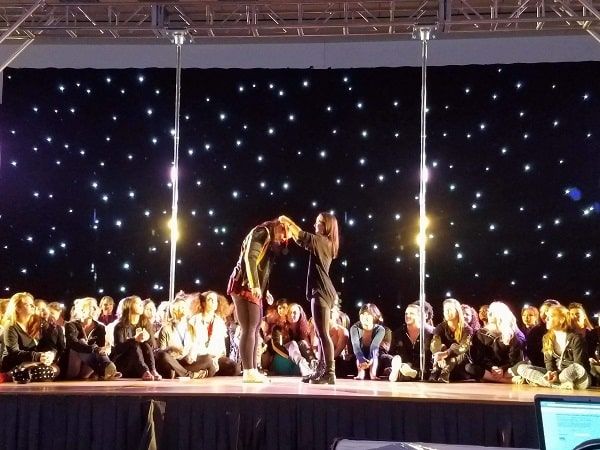 I want to encourage others to join studios, teach in studios, and open new studios. If you have been interested in pole, try it! The pole community is anxious to embrace you and offer you the support and encouragement you need no matter what your current ability is. If you are a teacher or studio owner, keep providing the transformational and empowering environments many of us need. If you are an outsider looking in, know this is a wonderful performance art and sport for all shapes and sizes and I invite you to take a closer look at what we do and the beneficial experiences participants like me receive.

Don’t forget to leave a comment on the post. We would love to hear from you. Also, feel free to share this motivational story with everyone on social media.