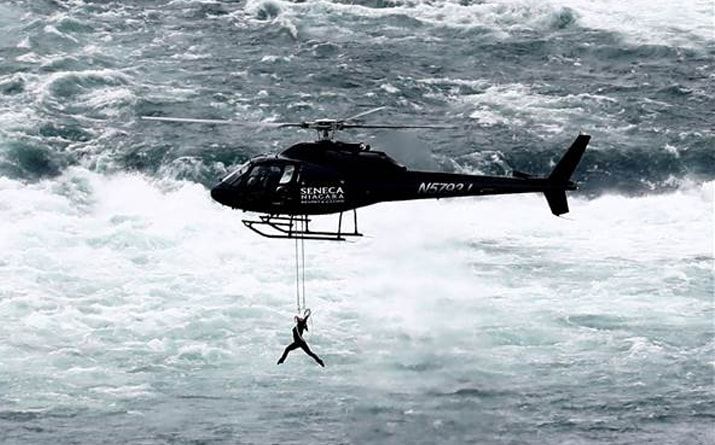 Erendira Wallenda makes history with Niagara Falls stunt. The Wallenda family is known for their daredevil stunts. On Thursday (June 15) it was Erendira, a professional trapeze and aerial artist, who gave the world a “whaaaaaa” moment after dangling by her teeth over Niagara Falls.

Not only did she hang by her teeth TWICE but Erendira Wallenda also broke the world record for highest suspension over Niagara Falls. Watch the incredible feat below:

On the fifth anniversary of her husband of 17 years, Nik, walking over the waterfalls on a tight rope, Erendira hung by her teeth from an aerial hoop dangling approximately 300 feet above the thundering water.

Her act set a Guinness World Record for height, breaking the record Nik set when he hung from his teeth 250 feet above Silver Dollar City in Branson, Missouri.

Transported by a helicopter, Erendira sat in an aerial hoop and performed multiple acrobatic flips before using only a mouth piece to suspend from the circle. She then hung upside down with her feet on the hoop before repeating the mouth stunt.

During her feat, her husband leaned face-first out of the helicopter with headphones on that allowed him to communicate with the pilot. She had a safety harness around her waist to comply with New York State law for stunts that occur more than 20 feet in the air. 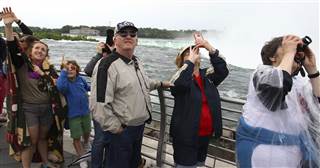 The family has had safety issues in the past. In February, Nik Wallenda attempted to perform another high wire stunt with an eight-person pyramid. When some performers slipped, he and three others were able to catch the wire while the five remaining fell to the ground. In a press conference after Erendira’s successful stunt, Nik confirmed that despite suffering injuries, the five performers are already training or performing again.

In 1978, family member Karl Wallenda died in a high-wire accident while attempting to walk between two towers of the Condado Plaza Hotel located in San Juan, Puerto Rico, according to the Associated Press.

After her routine, Erendira waved to the crowd watching her with binoculars and cameras. While she sat in the aerial hoop, the helicopter returned to the roof of the garage of the Seneca Niagara Resort & Casino. 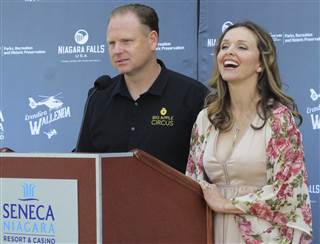 Erendira and Nik Wallenda at press conference before the Niagara Falls stunt.

Speaking with reporters afterward, Erendira said she couldn’t hear anything while dangling because she was listening to music.

“I just had to put myself back to my backyard training and I felt good enough that I was able to hang by my teeth a second time”she said in a press conference to reporters. She said she did not anticipate the wind to make the hoop shake as much as it did.

Erendira has attempted stunts since she was 5 years old and said she hopes she can perform another act with her husband five years from now — or pass the tradition of daredevil feats on to the next generation.

“I probably would want to spend all day long up there,” she said. “It was a beautiful and amazing experience.”