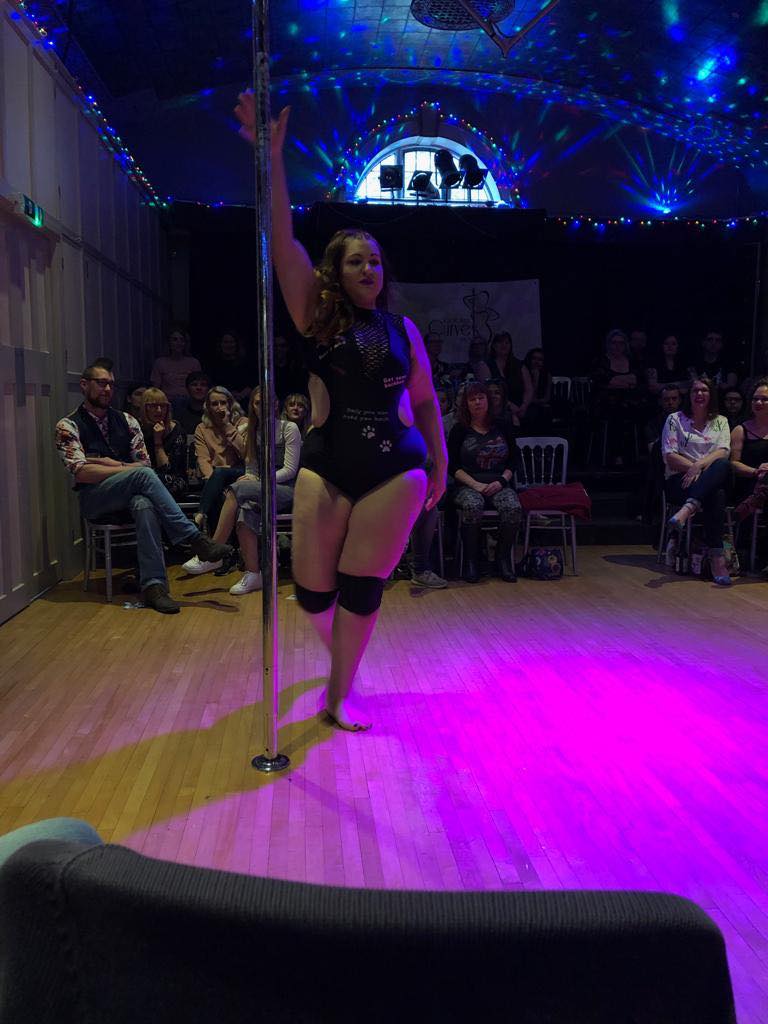 I had always heard that competitions were stressful, unfair, difficult, poorly organized and so on and so forth.  So, when I entered my very first competition was ready to fight both on and off the stage, however I was wrong.

Even before I ever reached the performance stage and months before I had all the information I needed (layout of the stage and distances of poles, map of how to get to the event, map of where to park, rules, regulations etc.).  Even a hairdresser (her personality was as bubbly as her technique) was on call for those of us that can barely manage to brush our hair.  Photographer and Video was already taken care of and no one had to worry about not having digital memories.

I worried that I would not have enough time to change, enough space to warm up or cool down, that I would not know where to go or what to do, again I was wrong.  The back stage area had more than enough room to frolic , put my face on, take my face of and get warmed up to my heart’s desire.  There was always someone with us letting us know when it was our time to warm up and where we should go. Any questions and concerns were taken care of faster than you could climb up onto the pole. And the cherry on the ice cream was that arranged had been the possibility to drink and eat backstage if you so wanted.

The judges total scores were tallied quickly so that no one had to suffer from a heart attack waiting for the results.  The medals were beautiful (and pink) and the gift bags were filled with loads of goodies from noted pole providers.

What I will always remember

Coming from abroad I felt I would have an disadvantage, I was unknown, and not in the UK Pole clique –  I felt this would count against me, and although each judge had their own way of judging (so where as for the same thing I would be marked up by one judge I was marked down by the other) the judges were nothing but objective.  Personally, having watched some of the performances I completely agreed with the judge’s views.

Watching these three perform sent chills up my spine. They are an inspiration and I was so excited to be able to watch them perform.

One of the things that keeps you going during a performance is the vibe that you get from the crowd.  The crowd at KAC was never silent, always cheering always pushing you to do your best.  It was as if each person sitting in their seat had come to see you and the performer after you and before you and so on and so forth.  Every move you made every step you took every time you twirled it was greeted with an applause.

I have never felt so supported during an event than I did during the KAC competition.  There was no one out there for themselves.  It was a party where we were all invited and we simply had fun together. The support given was so heart warming and so genuine it could bring tears to my eyes.  From even before I came to the competition to even now after I left these girls had, have and I bet will always have my back.

Thank you to pole cleaners who relentlessly climbed up and down the poles all day to make sure you were safe.

Thank you to crowd who made everyone feel like a star

Thank you to everyone who helped out with the competition, although you were backstage and not in the limelight with us, without you we could not shine

Last of all thank you to Karrie.  To Karrie who throughout the last few months never stopped to make our dream come true, never got tired, never gave up and managed to do something which only a few people have achieved. Make a dream come true.

Dimitra Kourmatzis is an Attorney-at-Law by day and an aspiring pole dancer by night. Her first every experience with Pole Dancing 3 years ago proved to be a love-hate relationship - Pole loves to hate her and hates to love her! She has been a participant in a number of performances as an active member of the pole community.
She also provides legal advice on matters pertaining to sports law.