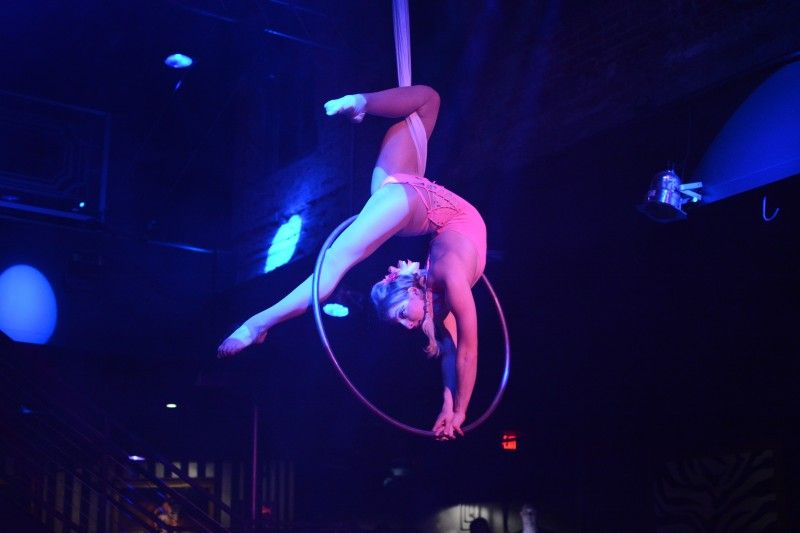 As an aerialist, I have been performing ambient aerial in nightclubs and festivals for five years. Ambient is one of my favorite ways to perform. I have made appearances on cruise lines, massive festivals like Electric Daisy Carnival and Decadence, and I’ve held two long-term residencies at local nightclubs in Denver and Colorado Springs.

What is ambient and why do aerialists cringe when they hear it?

Ambient or atmospheric aerial is a very popular attraction at upscale parties and venues because it doesn’t interrupt the flow of the evening while still lending an air of elegance and decadence to an event. When I am approached for corporate gigs, seventy-five percent of them ask for atmospheric.

However, ambient gets a bad rap. Sets are long and usually occur every hour. You’re also more in the thick of the party so people will be looking at you closely and interacting with you more than they would if you were on stage. You have to be “on” and yet be able to blend with the vibe of the party; you are an attraction, but not the star. Striking that balance can be tiring. Many performers feel that they are robbed of their creative voice when they are atmospheric, and so are less excited to do that type of gig. Not to mention clients like to think they can pay you less for the work you’re doing because it’s “easier.”

The truth is, though, atmospheric gigs pay the bills. So you’ve been asked to perform at an event as ambient entertainment. This article will discuss how to prepare for atmospheric gigs including tips for endurance, choreography, and pricing.

Ambient sets are typically ten to twenty minutes long and occur once an hour over the course of an event. Yet the average aerial routine will run only 4-6 minutes in length. That’s a huge time increase for a single set! And you have to do it three more times.

First of all: don’t panic.

Second of all: structure your regular aerial workouts to develop endurance.

The way to do this is simple: at the end of any given aerial workout, set a timer for ten minutes and get in the air.

Do whatever you want. It’s almost too easy! Once ten minutes feels like less of a challenge, add two minutes on to the end until you’ve worked your way up to twenty minutes – or perhaps more. I participate in photo shoots where we rig my silks off of high cliffs in Colorado. The wind, the heat, and other elements make performing in those environments tough. But thanks to my endurance training, I can stay in the air for up to an hour at a time. I’m not saying develop your endurance to that level, but if you can manage an hour of continuous flow in a rough outdoor setting, a twenty minute set at a music festival becomes child’s play.

What about choreography? It’s easy to throw the same ten moves over and over, but the audience does notice and they will get bored. So how can you sequence moves together to make your sets look cleaner while at the same time being dynamic enough to hold your audience’s attention? There are multiple considerations to take into building an ambient set including musicality, theatricality, circus elements, transitions, and the endurance to pull all of this off over multiple sets throughout the evening.

While you’re practicing your ambient sets off-duty, think about the flow of your movements. The way to sell ambient is by making what we do look effortless. For the most part, your audience doesn’t know the difference between a double star and a stacked-quad-birth-canal-insanity drop. On hoop, you can dazzle the crowd with a good spin. What this means for you is “less is more”. Grinding out a dozen power moves and leaving the stage in a heaving heap of exhaustion doesn’t quite have the right effect on the audience that you’re probably going for. Sure, they’ll be impressed, but they’ll also worry for your safety. Not what we’re after. The same goes for awkward transitions or hurrying into poses and holding them like you’re in a high school talent show. You want your audience to watch you because you are interesting, not because they’re worried about you.

A similar exercise is one I learned in my high school English class. Write a simple sentence; now expand it until it becomes its own paragraph. It’s a tough exercise but the same principle applies to aerial.

If you drag out and expand on every little position you go through in preparation for a pose or drop, you’ll be able to find opportunities within the transition to add a flourish into the big one. This is how you make your sets look seamless. Think about the way a photo loads in a browser. It pixelates, adding smaller and smaller details to the big picture until it’s crystal clear. Find the details and make them as important as the big picture.

Why so much emphasis on transition?

Let’s think about the difference between ballet and a floor routine from gymnastics. In gymnastics, it’s about getting to your tricks, throwing them, and sticking them as cleanly as possible; flourishes are almost a complete afterthought. In ballet, however, the dancer makes literally every step matter. What is a jete but an exaggerated step? Her demeanor is calm even as she executes the most difficult leaps, turns, adagios and extensions. She makes you think this is a walk in the park for her. As a result, you can’t take your eyes off her as she floats across the stage.

In ambience, aim to be a ballerina, not a gymnast.

Another benefit of emphasizing transitions is you’ll take longer to complete fewer moves so you aren’t working nearly as hard for each set.

Musicality can be tricky as you rarely have any control over what kind of music the event planners have in mind for your sets (if any). It will not serve you to be picky about what you can perform to. Instead in your free time, log on to Pandora or another music streaming service, pick a station at random, and listen to it for an hour. I like to do this alone in my apartment – whenever I listen to music, I move to it. Dancing around my apartment without my apparatus is so helpful because I’m no longer relying on my apparatus to do the work for me. I have to learn to read the music and interpret it with my body. The more you move to music, the more predictable it becomes and the more varied and interesting your steps. You’ll soon learn how to make yourself and the music more interesting through movement. It’s simple; you just have to practice.

As I said before, some clients assume that because you aren’t putting together a routine that ambient sets are less intense for you and require less rehearsal, so your time is even more undervalued than it may have already been.

I make sure to charge at least the same price as a client would pay me for a choreographed routine.

I explain to them that ambient takes just as much preparation as a routine, if not more, and they’re basically asking me for multiple routines for a single event. I’ll remind them that they’re actually getting a deal from me – because they care about keeping costs low and profits high. Lecturing them on artistic integrity or even expounding too much on safety (beyond the important things like rigging and making sure no one’s pointing a laser in your eye) will push them away. But if you tell them what they’re asking for versus what you’re charging and make it seem like a good value, they’ll go for it. If the client asks for multiple apparatuses, I tack on a percentage extra for each apparatus.

The bottom line is this: know what your time is worth both at a gig and in preparation for it (rehearsals, travel, set up and break down, phone calls, etc).

Ambience poses a unique challenge to an aerialist, as it is a mix of strength and elegance and musicality unlike a choreographed routine because it appears to be totally improvised. There are so many variables that go into an atmospheric set, and it’s the presence of those variables that make it so much fun to do. Many performers feel that they are robbed of their creative voice when they are ambient – naturally we all wish we could be the center of attention – but ambient demands that you stand out the way a statement chandelier does; that is, you’re beautiful and dynamic, but guests have the opportunity to turn away and enjoy the party. As a performer, you may not be the belle of the ball, but I assure you, if you do your job right, the guests will never forget you.

Ambient is, like most things in life, all about your attitude. Now you know what it takes to prepare for ambient performances, and with more practice you will learn to enjoy them, and that joy is contagious. If you love what you’re doing, your audience will love you for it.

I am an aerialist in hoop, silk, lollipop lyra, and hammock based in Denver, Colorado, USA. I have been performing professionally for five years including contracts with massive music festivals like Electric Daisy Carnival and Decadence, national tours, shriner's circuses, television appearances and cruise lines as well as two long standing nightclub residencies. I place a strong emphasis on theatricality and musicality, my goal is to sweep the audience away. I am currently a resident at the Mansion Nightclub in Colorado Springs.