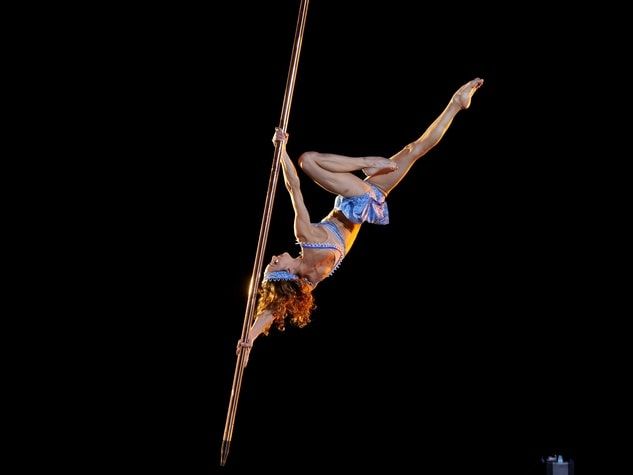 The Suspended Pole is a new act on Corteo and we are happy to tell you more about it!

The Suspended Pole is a new act on #Corteo and we're happy to show you more about it! Watch the video!

Corteo, is the latest in the Cirque du Soleil repertoire, and the show brings just as many aerial acrobatics, high-flying stunts, and superhuman acts as you have grown accustomed to seeing from your favorite circus troupe.

Corteo, is the story of a deceased “Dreamer Clown” whose spirit is looking back on his life and its many adventures and romances. The vibe of the show is a little bit dreamscape, a little steam-punk, a bit Gypsy, and all circus. The set is like a harlequin castle in the sky in 19th-century Europe. Everything is colorful and lively, from the costumes to the amazing stunts.

Recently, Mark Shaub, the artistic director of the Corteo show tour added a new aerial act in the show, the suspended pole.
Suspended pole (find flying pole on Vertical Wise eShop) is a dance pole that is normally planted in the ground, but this pole is able to fly and with their dolly system it is not only able to fly up and down but it can also go across the stage. No other Cirque du Soleil show has a suspended pole.

The Suspended Pole artist is Stephanie Ortega from France

The Suspended Pole artist is Stephanie Ortega from France. Stephanie has started her career in 1996 as a dancer at the National High School of Dance “Roland Petit” in Marseille. After the formation there she became particularly interested in cabaret performances. Her dream came true in 2003 when she was selected for the famous cabaret in Paris called “Crazy Horse”. During her stay in Las Vegas where she was performing for the same company she got in touch with aerial arts for the first time in her life. This was very inspiring and as soon as she got back to Paris she began an aerial formation with Mrs. Florence Delahaye. She was instructed and trained on all the aerial apparatus such as tissue, hoop, aerial rope, spanish web, straps and trapeze. Due to this comprehensive training she was able to make a choice towards aerial performances. Working with people from all over the world with different acrobatic backgrounds she had the chance to start and evolve in yet a new performance field which sparked her passion and ambition once again: the art of pole dancing.

In her act discovers the sheer pleasure of exploring movement and contortion-like shapes while flying above the ground on a suspended pole.

Begun in Quebec in the 1980s as a small group of street performers who wanted to “reinvent the circus,” Cirque du Soleil has since evolved into a troupe of over 1,300 highly athletic performers and talented musicians. These artists come from over 50 countries around the world, with backgrounds in everything from gymnastics, trampoline, and diving, to circus and street arts, to music and theater. When you see them perform, you can’t help but be impressed and even a little envious of their many feats of strength, endurance, balance, and agility.

We only hope that pole dance continues to become even more integrated into shows like this!