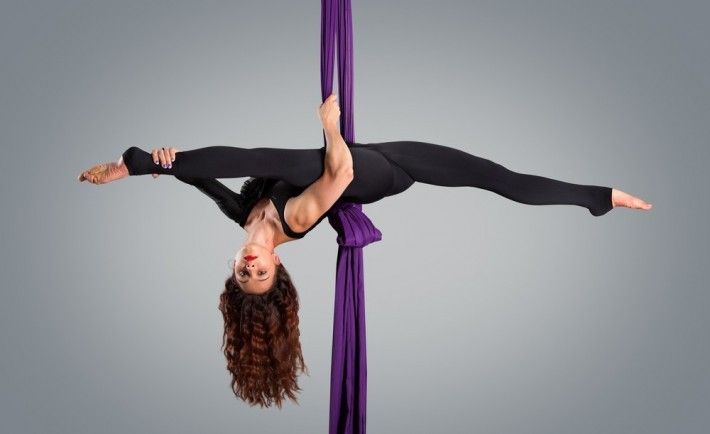 Aerial Silks or Aerial Tissues constitute the newest category of Aerial Acrobatics. Their origins are found around 1959, in a French circus school where some trainees were asked to make a difference by presenting an acrobatic act. One student presented her act by using a long piece of fabric.

Unfortunately, little is known about this performance except for one small account in a local newspaper. Nonetheless, from 1959 until 1998 (when Aerial Silks was officially recognized) a lot of artists had been experimenting with aerial silk in their performances. Interesting enough, during this period, the fabric which was coming out of the knot which supported it gave way to the second piece of fabric. In this way, Aerial Silks became what it is today.

Despite older experiments, the art of Aerial Silks became widely known by Isabelle Vaudelle and Isabelle Chasse. It was in 1998 when the two artists presented their Aerial Silks moves during a performance called Quidam, as part of Cirque du Soleil show. It is worth mentioning that Isabelle Vaudelle also took part in Mondial du Cirque de Demain in 1995 and presented an absolutely impressive act.

In the mid-90s, a team of British and French acrobats, who were influenced by Isabelle Vaudelle and her tutor, Gerard Fasoli, got interested in the art of this spectacular attraction. Soon after, aerial silk quickly caught on in the rest of the world.

In 2002, Acrobat Productions organized the choreographies of BBC TV Aerial Silks Ident, which had been a popular television show for over 5 years.

There is, however, an opposing argument regarding the founder of Aerial Silk. It is supported that the founder is Andre Simard who had specialized in the research and development of acrobatic moves of Cirque du Soleil since 1987. It was at that time when he was in charge of inventing new, innovative ways of showing acrobatic moves in order to impress the spectators. He transformed the acrobats from athletes to real performers by persuading them not only to use facial expressions but focus on body movements so as to express their inner feelings to the spectator in a unique and impressive way.
Soon, Simard’s techniques became widely known and they were used in every acrobatic performance worldwide.

Nowadays, exercising with aerial silks has a lot of fans and it is becoming more and more popular. Aerial silks constitute a unique way of expression as well as a means of testing our limits. It combines creativity, exercising, flexibility and music in a unique way.

Read also: The origins of Trapeze

You can buy Aerial Silks on our e-shop