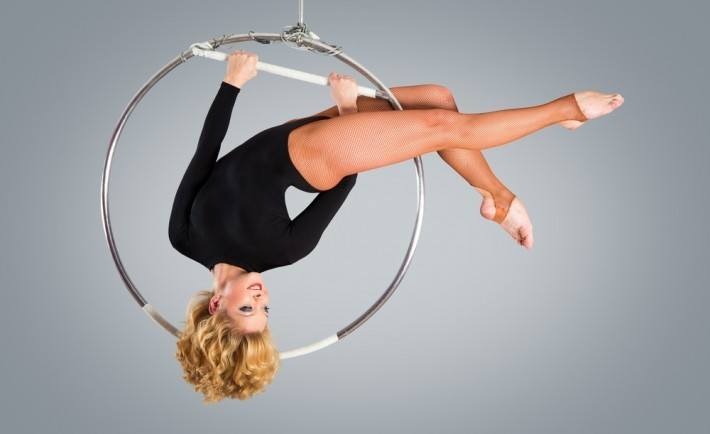 The Aerial Hoop (Cerceaux, Lyra) is a metallic, circular object constructed with steel or aluminium which reminds us of the common hula hoop.

The Aerial Hoop is hung from the roof with special ropes or wire. Most Aerial Hoops are available on the market with one or two points of assembly depending on their future use, the desired result and the performer’s level.

It is used for aerial moves and it can be static, rotating or it can be used as a swing.

Rotating: It is made to rotate around its axis, making the show more impressive.

When exactly Aerial Hoop as a means of circus performances first made their appearance is rather vague. It is known, however, that since the late 1700s, metal hoops were used in house yards as a way of recreation for children.

Reports on Aerial Hoop have been made in the middle of the ‘00s when they were used in the Varekai performance of Cirque du Soleil.

The first use of the hoop ever recorded is in an 1893 advertisement in New York Clipper where a performer called “Caedo” used this equipment. It was probably one of the first hoops made according to Edward Van Wyck’s statement in one of his letters in 1903.

You can buy Aerial Hoop on our eShop