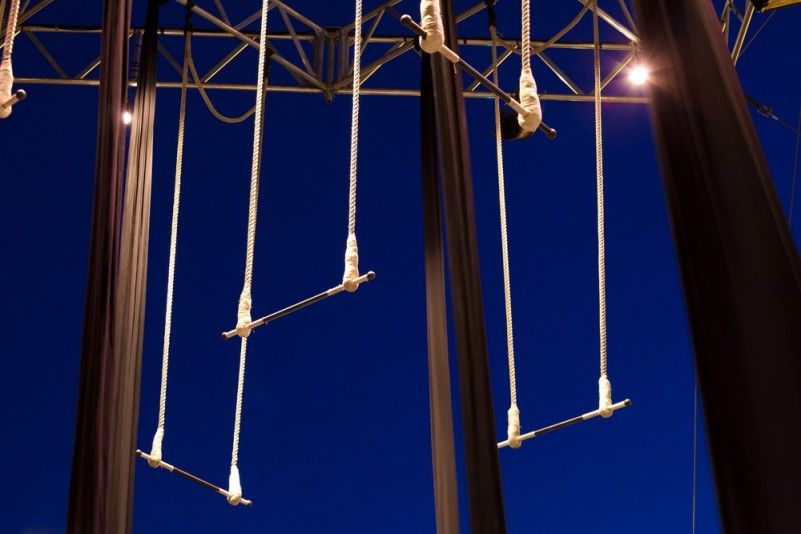 Trapeze is the general name for a range of aerial equipment. There are five trapeze types mentioned below:

All pieces of trapeze equipment consist of one or more horizontal bars which are hung from the roof with two vertical ropes attached on each side of the bar. The ropes might consist of cotton or cannabis usually with a wire inside them. You can buy Trapeze on Vertical Wise Shop

Static trapeze –as its name suggests- remains stable, it doesn’t sway during the performance. It can be used by more than one performer at the same time, by doing acrobatic tricks over and under the bar, on the ropes and by supporting one another with his weight.

TIP: If you have never been involved in any kind of aerial acrobatics, it is advisable that you take up static trapeze which easier than the other types. The lessons start with the teaching of simple moves, over and under the bar, which can be accomplished with minimum effort.

It is a sub-category of static trapeze which is hung from one point making the ropes form a V. In contrast with other trapeze types, where the emphasis is put on impressive acrobatic tricks, dance trapeze choreography is more artistic. It is influenced by contemporary dancing.

It includes all the skills used in static trapeze (climbing, posing, spinning etc). However, it is not fixed and it swings back and forth (just like the swings in playgrounds). Thus, it is more difficult to show the moves. The back and forth movement is triggered by the performer’s body weight.

TIP: You should be familiar with static trapeze before you start training on the swinging trapeze.

Two bars are used by two performers-aerialists. It is similar to swinging trapeze. When the right speed is reached, the acrobat (also known as the flyer) swings and jumps to the other bar. The other person (also known as the catcher) catches the arms of the flyer while hung from the second trapeze.

It can be found in many shapes and sizes. There can be two or more trapeze either joined together side by side or up and down. The most common are double or triple trapeze.
They are manufactured in any shape we want for various performances and shows.

It’s a static and swinging trapeze variation. It’s much heavier than the rest of the types and its major difference is that there are two small platforms attached to the bar where the acrobat can stand upside down on his head or by using his hands.