We don’t see extraordinary apparatuses making their first debut in the aerial scene that often. But thanks to Tanya (Tova de Luna), the inventor of the aerial spiral, we had the chance to discover a new amazing way of getting… vertical! Actually, not so new since Tanya first launched the aerial spiral in 2011. Though it got more publicity through a post on Vertical Wise’s Facebook page a few months ago:

Due to all of this publicity we wanted to meet Tanya and to learn more straight from the source. So here she is to answer our questions. Feel free to ask your question as well at the end of the interview in our comments section.

So, let’s find out about Tanya Brno. She has been an influential part of the Seattle circus scene for 10 years, after having trained most of her life at the nation’s top ballet schools including School of American Ballet (NYC), San Francisco Ballet School and Pacific Northwest Ballet, for which she moved to Seattle on scholarship at 16.

In her aerial career, she has toured in Ireland, instructed the circus staff at Club Med resorts in exotic locales, and has passed auditions for Cirque du Soleil, Dragone Productions, and Cavalia. In addition, she is the inventor of the aerial spiral.

She has hung 100’ off of a crane over the Duwamish River in a collaborative art performance piece and has trained many of the new aerial performers in the Seattle circus scene. 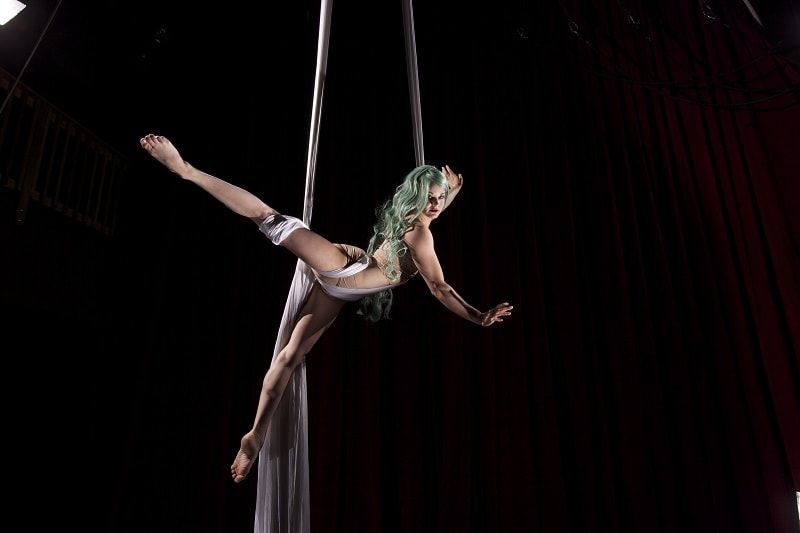 What is your background?

Ballet, Opera, Musical Theater. I was in training to be a professional ballet dancer from ages 10-18. I’ve trained on scholarship at Pacific Northwest Ballet School and attended summer camps at San Francisco Ballet School and School of American Ballet in NYC. I’ve always been creating things and performing from a young age. Being onstage is where I feel most natural. 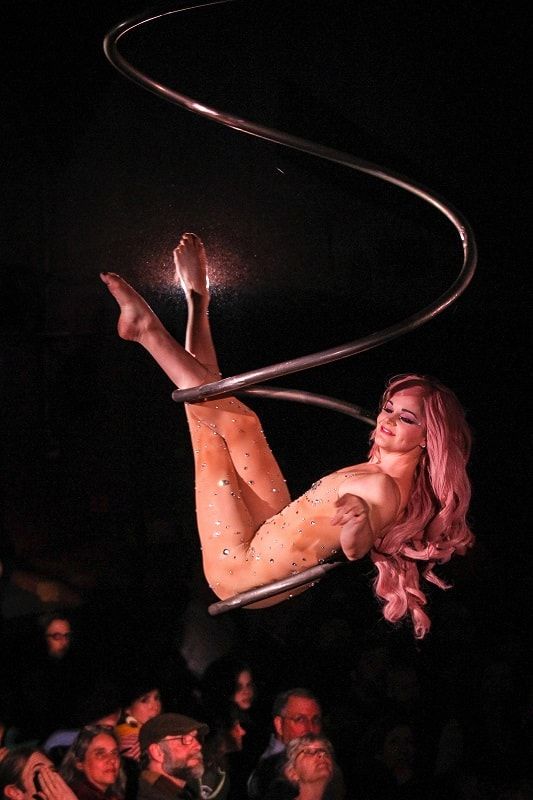 Where are you from?

When did you invent the aerial spiral?

From where did you get the inspiration for the spiral?

Northwest aerial artists have been creating invented apparatus for a long time; it’s common practice here. We have a strong creative community and lots of custom fabricators that are used to strange requests with the festival culture on the west coast (Burning Man, etc.). The spiral was a vision I had in my mind, and I literally took a sharpie and drew a corkscrew with some crude dimensions on a piece of yellow legal paper and handed it to the welder. It took soliciting over 10 shops to get someone to make it.

Who constructed it and does he commercially sell it?

I had a small shop in Tacoma make the original spiral; the one I perform on is essentially a prototype. I am now personally taking orders for spirals through my website. I have a welder here in Seattle that I am partnering with as well as one on the east coast (Todd Spiering of Circus Gear) to produce them, should serious inquiries arise.

I can travel to consult with welders of interested parties outside of the US. I would love to come consult for you! Currently, it is too expensive to ship overseas with freight costs. Please message me if you would like to host me at your school to consult and teach workshops!

How do you transfer it?

I transport it in a truck or large van. Currently, it is one piece so it is difficult to move. I am working on making it safely come apart for easier transportation. Shipping on orders is currently in the continental US for that reason. Freight is cost prohibitive for most buyers.

Have you registered the patent? How do you feel being its original creator?

I have looked into patenting it and met with a lawyer, and in the end it is not worth it. It costs thousands to register a patent, and then would only provide a bit of protection, and only in the US. Then you have to defend the patent. I would not want to sue other artists like myself in order to defend it. I am looking into copyright and trademark law instead at the moment. Instead of patenting, I am asking those that copy me to please credit me as the inventor. Giving credit is important. There is nothing ok about passing off someone else’s idea as your own, even though the information is so readily available online these days. I know sometimes it’s hard to know exactly where an idea came from, but if you know something is not yours, it’s honourable to say so.

How did the spectators respond?

The response to the spiral has been overwhelming. I never thought that it would get so much attention! My goal in creating it was to have a unique act for which to get booked in cabarets; it has turned into so much more than that. The spiral is literally taking me around the world, not only to perform but to meet new friends and teach. It has made me learn a lot more about being a business woman and the possibilities that can come from a commodity that others want. I am extremely humbled and amazed at how my creation has inspired others. 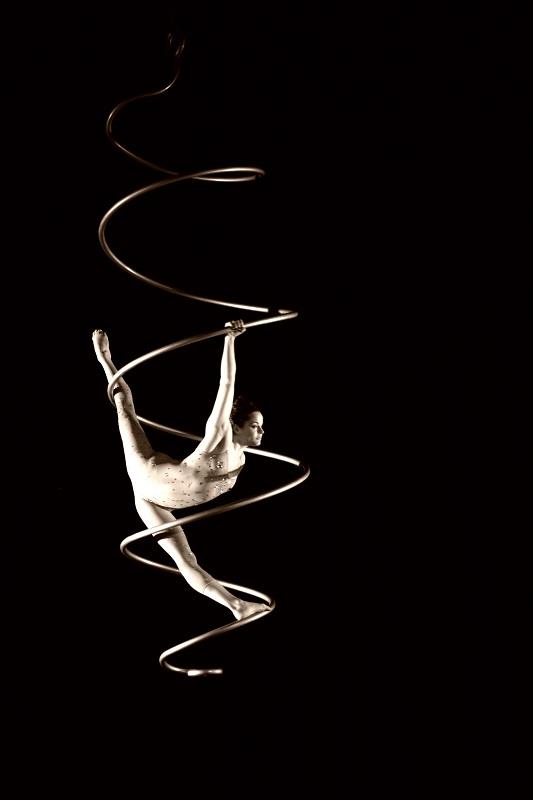 Under which category of Aerial sports would you include it in?

It is definitely in the Invented Apparatus category for aerial arts.

Do you teach this anywhere?

I may teach an invented apparatus workshop at Sanca in Seattle this summer, for which work on the spiral is included. I only have one, which is difficult to store, so making a workshop or class out of just spiral would require having more made and finding a place to store them. Anything relating to the spiral costs money, which needs to be considered before investing in one. Fabrication is only the first cost. Transportation, storage, maintenance and upkeep, etc. all need to be considered. When people find out how much actual investment these require, the pool of interested applicants shrinks significantly.

Do you believe that there is a trend which could develop it?

I believe a trend has already developed. There are over 1.000 posts from around the world on my #aerialspiral hashtag on Instagram.

How long prior to presenting your choreography in front of an audience did you practice and train?

The original choreography took me about 3 weeks to develop. I still perform a version close to the original and have seen it copied as well.

Have you considered the existence of any other kind of variation which could assist you and the people to use it more readily in their performances?

I would love to find a way for it to break apart to be transported and shipped easier. The thing with the spiral is that it is not a closed circuit like a cyr wheel; the joints do not compress on each other to support the fractures in the structure. The spiral is open-ended, so there is a lot of weight that would pull the joints apart. A special joint would have to be engineered in this situation; engineering costs to produce this are something that I would have to plan for. Again, anything related to this is expensive. There is a welder in Prague who is working on a spiral that comes apart who I would like to collaborate with in the future, and would like to go visit this year.

What are its costs and its characteristics?

Is it easy for someone who is already familiar and is a pole dancer or an aerial artist to learn this art?

Yes. None of the choreography I do on the spiral is incredibly difficult; I do throw in a single toe hang, neck hang, one arm handstand and oversplits, which are all things that require years of training to do safely and beautifully, but to any advanced aerialist or someone with similar strength and flexibility training, those skills are in their vocabulary or could be learned quickly.

The thing with the spiral is not just the skills or level of difficulty of skills being performed like other apparatus, but the hypnotic spinning and movement of the piece, the way my body moves on it with my ballet training, the music, costuming, and lighting that come together to create the entire vision. A lot of new aerialists get caught up on the difficulty of a piece or a move, and while yes, being able to do high-level acrobatic moves is important at a certain level and most of us can do them, it’s not the whole picture.

Yes, after a session of classes you may be able to do some of the moves, but will it look the same and be as satisfying as someone who has put their 10,000 hours into the art and has had a lifetime worth of movement training? It’s the whole package that creates the vision and what producers look for when hiring an act for the stage. 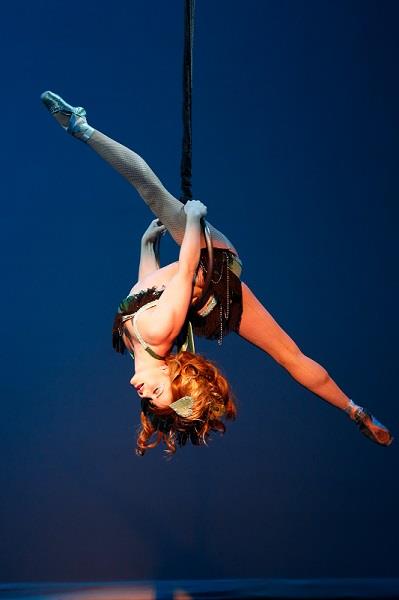 What kind of emotional reaction can you produce in the audience?

I think new aerialists should focus on development as artists in conjunction with the athletic component. I believe developing strength and preliminary skills on traditional apparatus and having a strong intermediate vocabulary is a good route before digging into invented shapes. It’s good to know where things come from before changing them.

Where could we find you this time period/season?

I just finished Moisture Festival, which is an annual circus, variete, and burlesque run of shows in the springtime here in Seattle. I have a weekly Monday night show at Pink Door downtown and have a few private events monthly that I do. I am also part of the burlesque group The Atomic Bombshells, which I join onstage a few times per year at The Triple Door. I frequently collaborate with local theatrical productions and I am part of the Burlesque Nutcracker with Verlaine/McCann Productions in December. I also help out with the professional development program at Sanca, here in Seattle. I love passing on my knowledge to the aerialists of tomorrow. 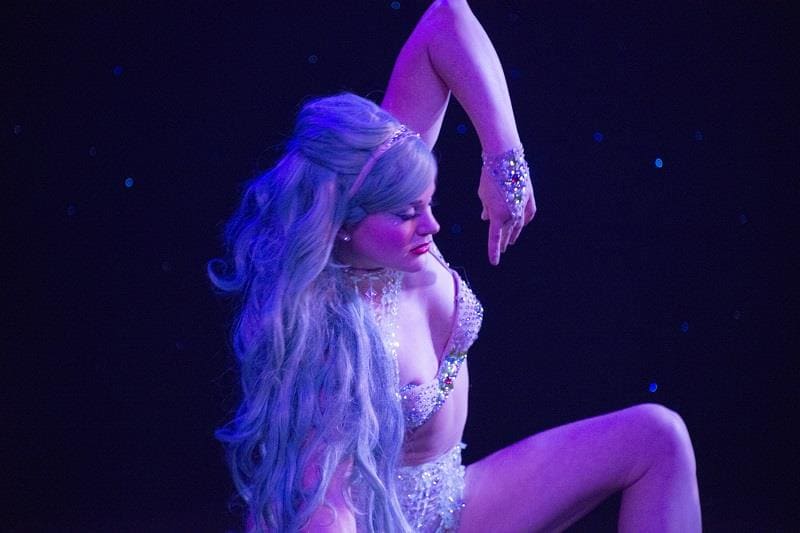 Aerial work for the last 11 years, working for myself, and getting older has taught me a lot about life.

Here are some of the most poignant insights I can think off to share at the moment.

That’s all for now. Thanks so much for being interested in my work and taking the time to interview me!